Curious about who makes up the 1%? We did a deep dive into the most fascinating statistics about millionaires (and billionaires) to give you an idea of who the world’s wealthiest are, how much they’re worth, and how they got there.

To paint a clear picture, we’ve broken down our data into people, demographics, and trends.

According to data from Forbes World Billionaire’s List, these individuals are the wealthiest of the wealthy. In this section, we’ll look at who tops the list worldwide and in the US.

Who Are the World’s Wealthiest People?

Eight of the top 10 wealthiest people are from the United States, along with Bernard Arnault from France and Mukesh Ambani from India.

Here’s a breakdown of the world’s wealthiest and what they do:

Wealthiest People in the United States in 2022

When we isolate the list of the world’s wealthiest to Americans, Michael Bloomberg and Mark Zuckerberg join the list, with net worths of $82 billion and $67.3 billion, respectively.

Wealthiest Women in the United States in 2022

Only one of the wealthiest women in the US falls in the top 20 wealthiest people in the world, Alice Walton, with a net worth of $65.3 billion.

When looking at the world’s top 50 wealthiest people overall, the following women are included:

Here’s a look into the demographics of millionaires in the US and abroad. We’ll look at millionaires through lenses like gender, age, location, and ethnicity.

At least 87% of billionaires in the US—and the world—are men.

Around one-third of America’s millionaires are women, but there is a larger discrepancy when it comes to billionaires.

According to Statista, this is the breakdown of billionaires by gender: 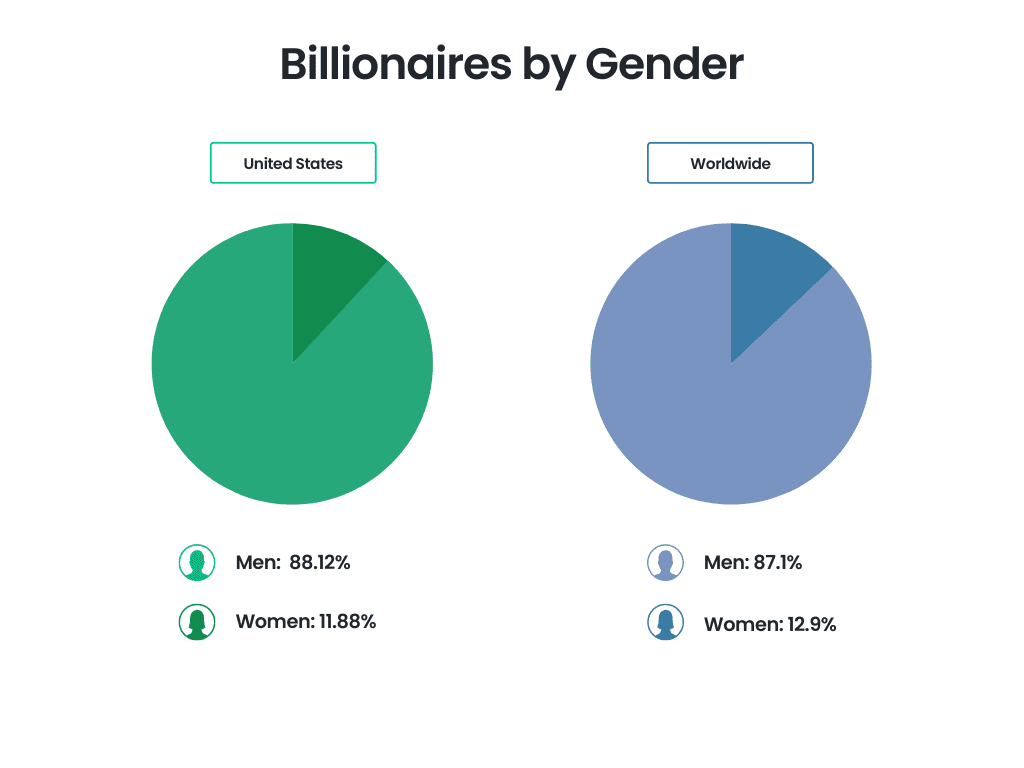 Most millionaires in the US are 60-79 years old.

More data published by Statista suggests two-thirds of US millionaires are 60-79 years old.

Another 23% of Americans with a net worth of $1 million or more are 50-59, with a small percentage of millionaires being 40 or younger.

Approximately 1.79 million of the 22 million millionaires in the US are under 30.

New Jersey has the highest ratio of millionaire households in the US.

9.76% of households in New Jersey had at least $1 million in assets, according to the Statista Research Department’s 2022 study.

According to this data, New Jersey, Maryland, Connecticut, Massachusetts, and Hawaii have the most millionaires per capita in the United States. College-educated white and Asian people may have the highest odds of becoming a millionaire in the US.

Researchers from the St. Louis Fed set out to estimate how ethnicity impacts your likelihood of becoming a millionaire, analyzing data from the Federal Reserve’s previous Surveys of Consumer Finances in a Bloomberg report.

They determined the odds of becoming a millionaire in the US as a middle-aged person with a Bachelor’s degree by race:

62% of millionaires received their degrees from a state school or public university.

The majority of millionaires in the US (88%) have a college degree. But according to Ramsey Solutions’ National Study of Millionaires, nearly 2/3 of millionaires graduated from a public university or a state school.

Only 8% of millionaires obtained their degrees from an elite or Ivy League school.

More millionaires have graduate degrees than members of the general public.

On the topic of education, the study did find that 52% of millionaires have earned a Masters or a Doctorate degree. To compare, 13% of the general population report having a graduate degree.

Most millionaires got there by investing in an employer-sponsored 401k plan rather than inheriting money or earning high salaries.

Some people assume most wealthy individuals were born with a silver spoon, but the numbers disagree. 79% of the Ramsey Solutions Study’s millionaires said they received zero inheritance from their parents or relatives.

In fact, 8 out of 10 millionaires featured in the survey said they made their fortune by investing in their company’s 401k.

And 70% of respondents said they didn’t even make six-figure salaries during their careers.

Most millionaires don’t serve in leadership positions at companies.

The survey busted open even more misconceptions about millionaires, revealing that only 15% of millionaires serve(d) in senior-level positions like CEO, CFO, or VP at their companies.

Out of the 10,000 millionaires featured in the survey, these were the top 5 most common careers:

So what do millionaires have in common? According to a study from Coldwell Banker Luxury, here’s a profile of the average US millionaire.

In this section, we’ll recap some big-picture data points and present the outlook for millionaires in the future.

Most millionaires live in the United States and China.

According to Credit Suisse, 51% of the world’s wealthiest people call the United States or China home.

Here’s a look at the percentage of millionaires living in the top 5 wealthiest nations based on the number of millionaire households:

The number of millionaire households in the US has steadily climbed every year since 2009.

In 2013, the number of millionaire households surpassed the previous record set in 2007. 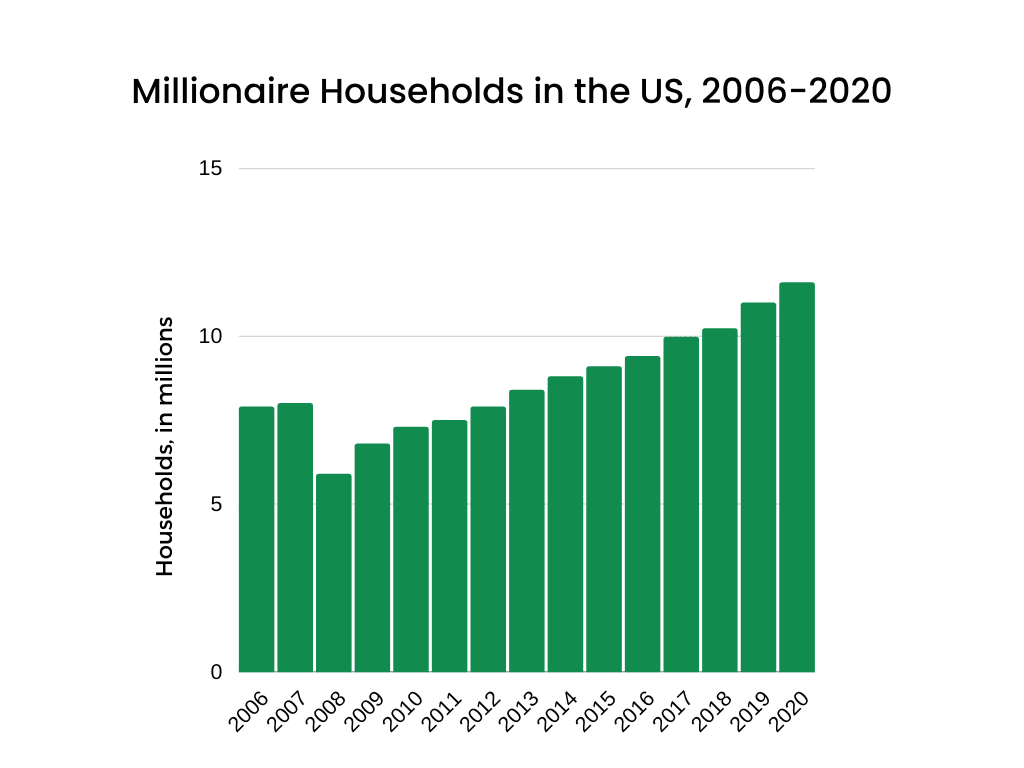 The number of millionaires in the US is predicted to keep climbing through 2025.

Credit Suisse predicts the number of millionaires in the United States will increase by 13% by the year 2026.

That’s an estimated increase from 24.48 million to 27.66 million millionaires in the nation.

The number of people with more than $50 million increased by more than 50% in the last two years.

Alongside the growth in millionaire households, there has been a major increase in ultra-high-net-worth individuals, according to Credit Suisse.

How Much Money Do the World’s Millionaires Have?

To give you some perspective, here’s an overview of the wealth range of today’s millionaires, using data from the Global Wealth Report:

The US gained the most UNHNW individuals in the last year, making a major contribution to the over $50 million club.

It will be interesting to see how the millionaire community grows and changes in the years to come as more households reach millionaire status. 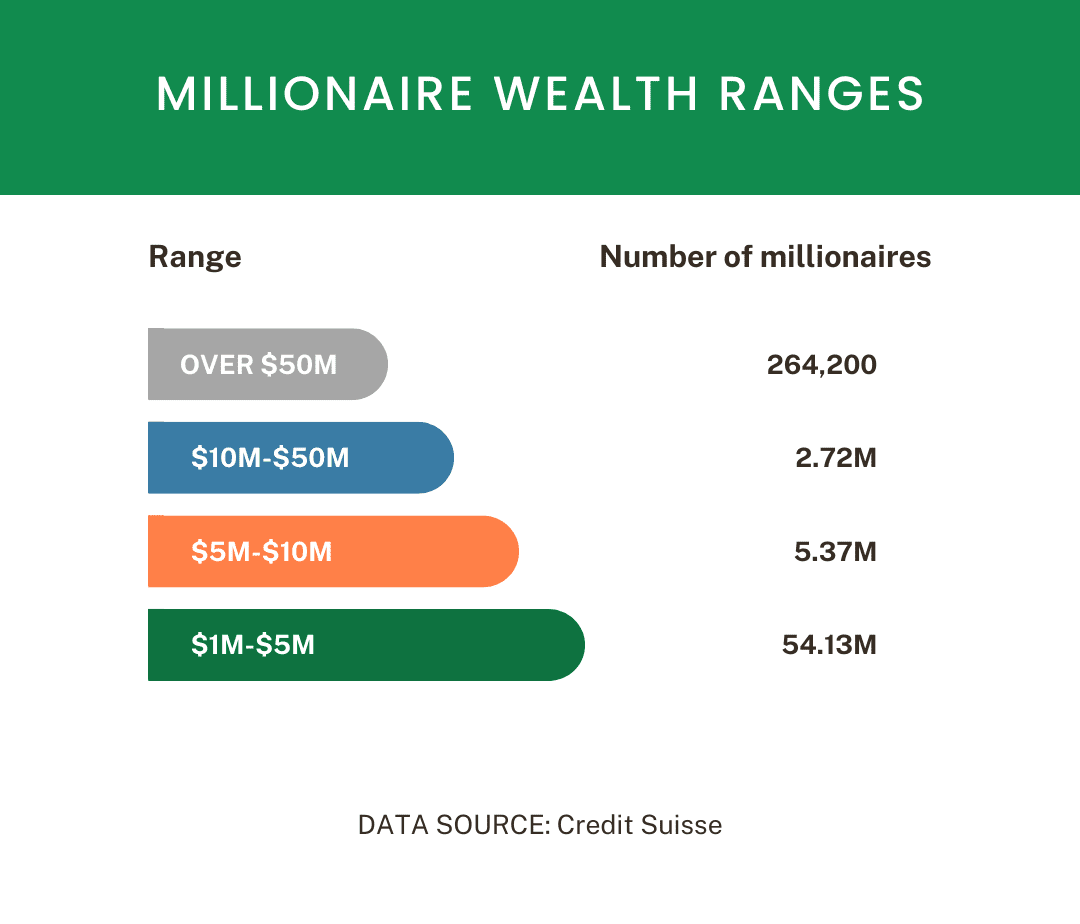 Millionaires come from all walks of life and careers, and there’s more potential now than ever to become a millionaire.

And the great news is that most millionaires don’t start out with an inheritance or an Ivy League degree.