The side hustle industry is booming as more people are starting to pursue what excites them, and create independent sources of income.

Side hustles are a great way to put your passion and skills to use and unlock more earning potential in your free time.

And based on data, the side hustle industry isn’t going away, with more and more people tapping into extra streams of income each year.

We’ve pulled together the top side hustle statistics to help you learn more about the industry, understand how and why people start side hustles and see how much side hustlers actually earn.

Here are a few of the biggest statistics about side hustles that paint a picture of the state of the industry.

More than one-third of Americans report having a side hustle in 2022.

In a recent survey from Zapier, 40% of Americans reported having a side hustle. That’s 2 out of 5 people who are earning multiple streams of income.

The survey also found that 36% of Americans either launched into a new side hustle in 2022 or they plan to, up significantly from previous years.

Men are slightly more likely to have a side hustle than women.

Zapier’s study revealed that men are slightly more likely to participate in the side hustle industry than women, at 44%, compared to 37% of women.

Millennials and Gen Z are the most likely generations to have a side hustle.

In terms of age, Zapier found that Millennials and Gen Z make up more of the current side hustle industry than Boomers and Gen X. The younger generations also have the highest probability of starting a new side hustle.

Microsoft’s 2022 Work Trend Index found that 70% of Gen Z and 57% of Millennials planned to pursue a side hustle in the coming year.

Higher-income earners and more educated people are most likely to have a side hustle.

According to 2019 US Census Bureau data, education and income correlate with side hustles.

People who have a Bachelor’s degree or higher are more likely to have a side hustle than less educated people.

Similarly, the higher your income is, the more likely you are to have a side hustle or two.

Provo, Utah has the highest percentage of side hustlers of any US city.

Using Census Bureau Data, BackgroundChecks.org broke down the percentage of side hustlers in metropolitan areas in the U.S.

Here are the top 10 cities for side hustlers, based on that data:

Most people start a side hustle to create extra income and gain personal freedom.

Vistaprint recently launched a survey of full-time workers with side gigs. These were the top 3 biggest reasons cited for starting a side hustle:

Meanwhile, The Hustle’s survey named personal freedom as the biggest motivator, with 38.7% of respondents citing it as the main reason they started a side hustle.

Around 1 in 3 side hustlers say inflation was a factor that led them to start a side gig.

An Insuranks survey of side hustlers revealed that 29% of respondents factored inflation into their decision to start a side hustle. And 51% said they’re considering starting an additional side hustle because of inflation.

Priorities have changed as a result of the COVID-19 pandemic.

The recent uptick in side hustles and drivers for starting a side hustle track with data from the Work Trend Index.

47% of Microsoft’s survey respondents said they’re now prioritizing their families and personal well-being over work more than they were before the pandemic.

Research shows that having a side hustle helps, rather than hurts, job performance.

Side hustles sometimes get a bad rap in the corporate world, with companies frowning on or downright banning their employees from starting up a side business.

But multiple studies, including this one in the Academy of Management Journal, suggest that having a side hustle empowers employees and strengthens their performance on the job in more cases than it causes conflict.

The majority of side hustlers say growing their business is their biggest challenge.

Side hustles come with their own unique set of hurdles. Most of The Hustle Survey respondents cited growth and marketing as their biggest challenge, followed by limited time and coming up with the right business ideas to pursue. The United States freelance market is pretty massive. According to Marketdata, the US side hustle and gig market was worth an estimated $2.58 trillion in 2018. At that time, the top 9 gig companies, led by Airbnb and Etsy, made $13.6 billion.

Most side hustlers devote 5-20 hours a week to their enterprise.

Curious about how much time people put into their side gigs? The Hustle reports that 3 in 5 side hustlers spend 5 to 20 hours per week working on their side hustles. Time Devoted to Side Hustles

59% of side hustlers work on their side ventures in the evenings when they get off work.

Vistaprint’s survey found that most side hustlers like to work on their gigs on a “5 to 9 “ basis between the time they get off work and when they go to bed. 48% say they hustle on the weekends, and 27% get to work on their side hustles bright and early in the morning before going to work.

According to a data report from MBO Partners, 34.1 million people did part-time independent work in 2021, up 39% from the year before. Over half of those people are considered “occasional independents” who work regularly but without set hours.

27% of people have turned one of their hobbies into a side hustle.

Out of 2,000 full-time workers Vistaprint surveyed, 27% say they’ve started a side hustle centered around their hobbies. Another 55% say they’d like to turn their hobby into a side hustle but just haven’t taken the leap yet.

Online and social media work is the most popular type of side hustle, making up 16% of the side hustle industry.

Zippia’s survey reports that 3 in 20 side hustlers work in the online or social media industry. According to that survey, here are the top 5 most popular side hustles.

63% of people who earn money in the Creator Economy are part-time independent creators.

The creator economy makes up a huge part of the side hustle industry. MBO Partners found that over half of people who earn money as content creators do it as a side hustle. According to the study, these are the top 5 places creators make money. 65% of side hustlers use automation to streamline their business.

Side hustlers are all about automation. In fact, two-thirds of people with a side hustle say they automate some of their business processes, according to Zapier.

48% of survey respondents said they automate at least half of their business, with 14% saying their side hustle is fully automated.

Online businesses are the highest-paying side hustle.

The Hustle’s survey of entrepreneurs revealed that online businesses have the highest earning potential among hustlers who make at least $1,000 per month.

Here’s the list of the top highest-paying side hustles from the survey:

Most side hustlers who earn $10,000 or more per month are investors.

Based on the Hustle’s survey, the highest-earning side hustlers who report earning more than $10,000 per month make at least some of their money investing.

46% of side hustlers earn at least $500 per month from their ventures.

Here’s a breakdown of how much people earn from their side hustles: Side hustlers between the ages 55-64 outearn other age groups, making an average of $1,061 per month.

Based on Zippia’s side hustle survey, here’s the average monthly income of side hustlers by age group:

Gen Z makes the least of all the age groups surveyed, earning hundreds of dollars less than Millennials and older age groups from their side hustles each month.

Over one-third of all side hustlers spend their money as disposable income.

Wondering what side hustlers do with their earnings? According to Zippia’s survey data, these are the top 3 ways side hustlers spend the money they earn from their ventures:

The side hustle industry is booming as more and more people are starting to prioritize their well-being, pursue what excites them, and create independent sources of income.

Millions of Americans are getting creative with their hobbies and interests and turning them into side hustles. There are endless ways to earn, and as the data shows, you can get started at any age, any place, and in any industry.  It will be exciting to see how the industry continues to grow and innovate in the years to come. 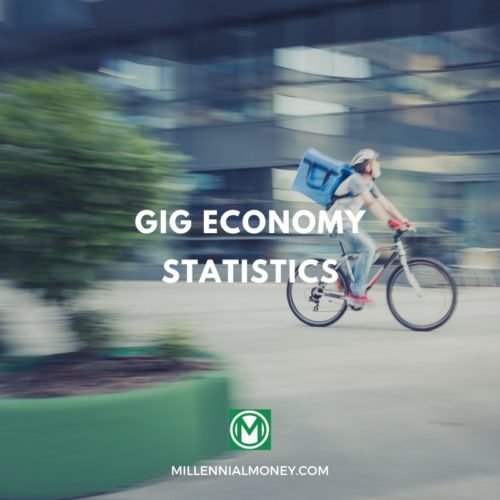